Lord. Doctor Sam Beckett is currently pretending to be mentally handicapped in the TV show Quantum Leap, and honestly it’s getting me down. “Interesting” side-note: the end of the last episode of QL showed him leaping in and getting called “retarded” by his older brother. Now, from my bourgeois, liberal, post millennium standpoint, I was assuming that the brother was just being 1960s ignorant. But no, Sam Beckett, obviously distressed and confused, looks his mentally-handicapped reflection in the eye and says “I’m retarded?” You’re supposed to be from the post-Clinton, PC future Sam, show some fucking respect for the leapee.

God has there ever been a tackier, clammier more offensively pseudo-liberal piece of shit than Quantum Leap? I’m not going to get into it now because by Christ I think I may explode, but suffice to say: it stinks. It’s dimwitted, humourless, faux-pally Christian propaganda of the worst kind, and the fact that I used to be such a huge, huge fan fills me with horror (though to my credit, I was just waiting for Doctor Who to come back on the television - and anything remotely time travel-related would have to do. See also Crime Traveller).

On a mostly unrelated point, this is Frankenstein’s monster. I’ve just realised I love drawing Frankenstein’s monster, and I’m really, really digging Grant Morrison’s take on DC’s take on the character (although issue 2 was a beautifully made mess - appropriate I guess). Anyway, I don’t wanna bore you all with comics stuff, so here’s a drawing: 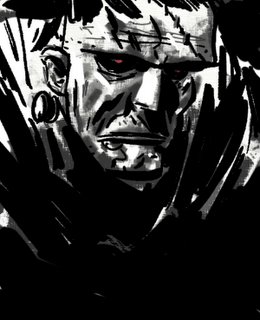 Hey, know how I like to say 'told you so'? I always knew Quantum Leap was the 'Most Tedious Show Ever Made'. Watched it every week obviously, mainly because my dad and brothers were fans (idiots) and I couldn't move from the sofa due to my doctor-diagnosed TV addiction. Sam: his big fat face, his Man-at-Littlewoods Do, his dumb-bum luck, his blah blah morality, his dubious qualifications as a futuristic physicist and don't get me started on his side(please may I)kick Al... AAHHHH. The memory of it enrages me beyond human emotion. Why, for the love of TFTPTASQG, did you bring this up? I may never read your blog again!!

To be honest with you, this is more from the TFTPTABA (Things from the past that are bloody awful) files. You pretty much hit the spot with two things here: the dumb-bum, "somebody up there likes me!" luck and the morality thing. It's all a lot of croaky voiced, hollow, I'm-going-for-the-Golden-Globe sentiment, and it's rotten. It occurs to me that with it's piss-shallow characterisation and thick-eared moralising, it's kind of like a cartoon - but a cartoon which wheezily bangs on about civil rights and emancipation and "the gays" to give it some kind of dramatic heft. Doesn't work, and it comes off like a "very special" episode of Masters of the Universe where Orco gets HIV or whatever. Bad.

Hey! No knocking Crime Traveller! Not only was exactly the sort of mid-evening lightweight drama that I love, it also served the invaluable purpose of keeping Chloe Annett out of Red-Dwarf wrecking trouble.

pps Surely Fair-uza should be the name of a character in an instructional cartoon about copyright?

OK, firstly: Chloe Annett was great, and she didn’t “wreck” Red Dwarf – it had been on the skids for years (you could even say that their hiring of a bit of “posh totty” was symptomatic of this decline). Secondly, Crime Traveller was the worst kind of ropey, tatty old sci-fi tosh. Brought to you by the producers of BUGS (which I’ll bet £10 and a party seven you also liked, Gaz) and starring David “charisma void” French. Thanks a lot, the BBC.

Have not seen The Worst Witch. Perhaps one of the ladies (hello ladies!) can bear you out on this? However, I'm all for having Fairuza as a Copyright Protection Avenger.

ppps It was Man-At-Arms that gave Orco the clap. You could have guessed, really; never have I seen a cartoon character look so fabulously 1970s-San-Fran-bathhouse gay.

Of course you did. *pats Gaz's head*
And surely this guy from TV's She-Ra: Princess of Power wins the San-Fran Disco Queen Grand Prize?

Fairuza sucks, and so does your QL bashing. Have some respect - a man is dead!

Because of our QL-bashing? Hmm, maybe you're on to something there: last night's QL featured Michael Madsen as a violent/dyslexic dock-worker who beats up "retards". Michael Madsen was also in Reservoir Dogs as a violent/probably dyslexic thief who shoots Chris Penn, who *looks* like a...

Dan, you need to check, yo'self before yo wreck yo'... I mean, the site you linked to doesn't accept hotlinking. There's no cool way to say that.

But then, he does have a big pink heart on his crop-length shirt.

Yeah, all that *and* the cape *and* the collar. It's just too much, dahling! Now which of these magical mirrors shall I look in first? Yes! Yes! This one on the floor! But I must first adopt the manner of a tiger, about to spring for my prey!

Gary Dunion said...
This comment has been removed by a blog administrator.
11:18 AM

There only one way to settle this.

Bow just broke a nail and Man-At-Arms is moving in for the "kill". Lord.

We all thought you should work out how to read imdb.com for yourself, G-Unit.

Hey, did y'all know that Chris Penn is actually dead? And, if so, why didn't anyone tell me?

Yes I did. I was making a sort of clever-clever metatextual joke, incorporating Quantum Leap, Reservoir Dogs and the mentally handicapped. Can you *believe* I'm not getting paid for this?

Shame about Penn. My money's on heart attack: he'd got crazy-fat and old looking in the last ten years.

Related note: what's the "correct" term for "mentally handicapped"? Every time I write... that, I can feel my soul wither ever so slightly.

Speaking as the political correctness consultant of the group (which is why I'm allowed to be as offensive as I want), I'd say the problem with "mentally handicapped" is that it's such a broad catch-all, including brain injuries, birth defects, and illnesses both mental and neurological.

The bit that's probably really annoying is the fact that some of these problems lead to lowered intelligence, whereas people with cerebral palsy, for example, who might well find themselves described as "mentally handicapped," are no more likely to be thickies than anyone else.

So, basically, the problem is that "mentally handicapped" is just a longer version of "retarded".

I say we just split the difference and go with "dim". Who's with me?

(sorry, my irony meter just pinged. Ah - apparently there's a problem with me whinging about QL's treatment of the, er... differently mentally able, AND making the above joke. I'll get right on that)