It's going to be a big year for DC Comics' premiere bastard! 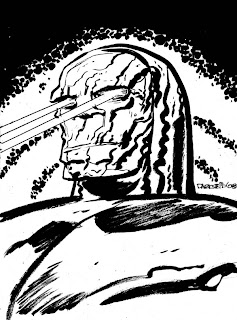 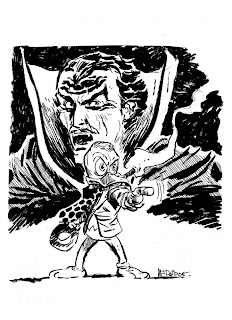 Pentel brush pen and PITT pen. Sorry it's not better. Gene's terribly ill at the moment, so if you want to donate a little something, you can click here.

For the excellent Warwick Johnson Cadwell - here's a pic of Elka, Swedish Troll-Slayer par excellence. Another insanely fun character to draw. Warwick, if you're ever looking for pin-ups let me know (and I'll probably have a crack at Gelatina quite soon...) 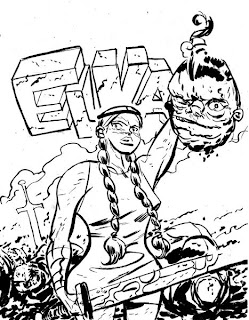 Here's a sketch of Pat Mills and Kevin O'Neill's seminal (and frankly rather alarming) creation, Marshall Law. I loved/feared the Lawman when I was an impressionable teen, and got into some trouble when my old man found a copy of Strip! (which featured some ML naughtiness) in my room. 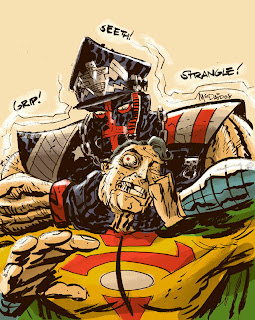 I really enjoyed drawing this, and I think it shows. Thanks to Mighty Mark Cardwell for the suggestion.
Posted by Dan McDaid at 2:38 PM 7 comments:

He's surprisingly tricky to get right! And I think I've messed up slightly here. It was fun, tho. That's just some generic baddy he's smacking up there, by the way. I think he's called Gunhands or something. 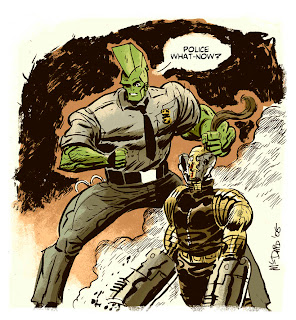 Pentel brush pen on printer paper then a bit of photoshop "magic".
Posted by Dan McDaid at 6:38 PM 2 comments:

I watched Hellboy last night. Sadly, it's still not very good. Lots of problems, but the main one is that there just isn't enough Jeffrey Tambor. I bent the missus' ear off during the film's dreary, CGI-soaked climax, by continually going "where's Jeffrey Tambor? I hope Jeffrey Tambor's alright. Are they going to cut back to Jeffrey Tambor?" This in spite of having seen the film before. They cut back to JT a little way into the credits as a sort of joke, showing him panicking in the dark as something evil approached, and apparently missing the fact that elsewhere in the film some effort had been made to expand his character beyond the role of comic support, and even to offer him as a kind of replacement father figure for HB (cf. the bit with the cigar). Anyway, this typifies this rather odd, flat, strangely schizophrenic film - a film which should be Die Hard meets the Exorcist, but which too often feels more like Spy Kids 4: Cthulhu Returns.

Anyway, I sketched a movie-ish HB. I hope you like it. 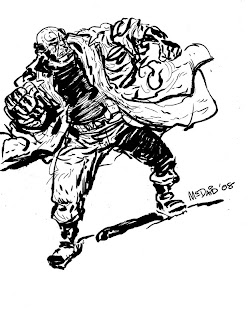 Brush pen on printer paper. Took about ten minutes and it shows.

...aaaand, I also did a slightly wonky Mister Miracle for Wilfredo Torres. Sorry WT - I've got a better one in the works. 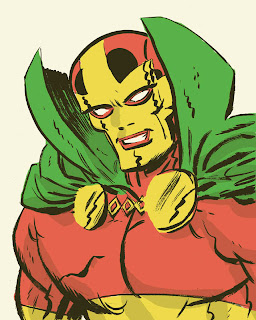 Pentel brush pen and photoshop and I watched the most amazing thing on the internet last night. US broadcaster Keith Olbermann - who I hadn't heard of before - attacking GWB in the most erudite, comprehensive, and fantastically rabid way imaginable. Manic, thrilling stuff, and nearly enough to give my bad liberal self a semi. Here's a link, if you're interested. To my US viewers, this is probably ancient news, so sorry about that.

...and lastly but not leastly, I did a Shadow for my pal Mark Cardwell. Hope you like it, chum. 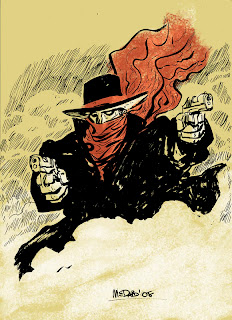 Pentel brush pen on printer paper, with some photoshop colours thrown over it.

More suggestions for Warm-Up Sketches please! I'm spending more time on these than I should, but they are a lot of fun. NB. I'm not prepared to draw Keith Olbermann.
Posted by Dan McDaid at 1:43 PM 12 comments:

I think someone asked for a Sandman, right? Anyway, here's a Sandman... 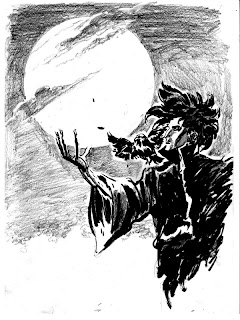 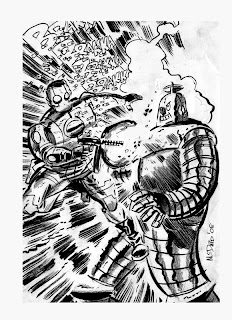 I thought this might look a bit nifty with some pulpy colouring on it... 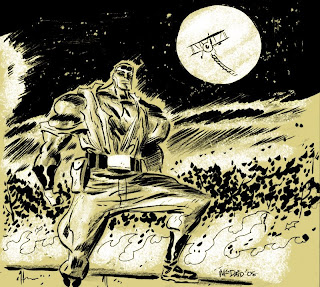 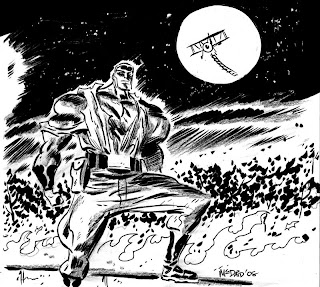 This was done with a Pentel Brush pen and 2B pencil on printer paper, with a little bit of PITT fineline for the fire and sundry details.

I actually did this in the middle of the night on account of being bored and unable to sleep, which means I am already breaking the Warm-Up Sketch rules. Never mind, I hope you like it anyway. Next up... Dream from Sandman, or Atomic Robo, or Mister Miracle (cheers to Kyle Latino, Mattcrap and Wilfredo Torres for the suggestions - keep 'em coming!)

As requested by David, a sketch of DC/Milestone character Static. This was a warm-up before starting the business of the day, and jolly good fun it was too. I really enjoyed drawing a character outside my comfort zone - and I aim to do more. Suggestions please! 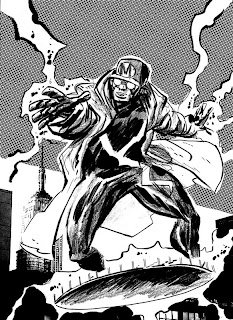 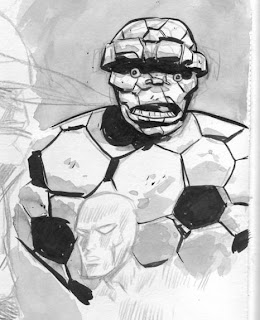 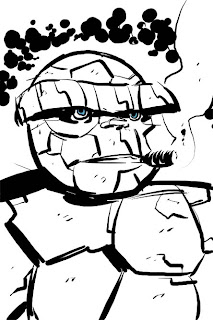 The first one was done with acrylic black ink and an ink wash. I think I might have posted it before - sorry about that. The second one is a Wacom/PS jobby.

Atcherlly, that reminds me: I am always available for commissions. Get in touch via the email /comment section and let me know what you want.
Posted by Dan McDaid at 12:42 PM 4 comments: