- I moved from Dundee to London. London is great, except: ACCOMODATION TINY

- I finished draft one of my next script for Doctor Who Magazine. It contains the words "Ringo", "peanuts" and "northampton".

- I got annoyed at how last week's comedy playhouse thing on C4 ripped Arrested Development off blind. One bit in particular, a courtroom scene involving an incompetent lawyer who was a mesh of GOB and Barry Zuckerkorn, and a bible thrown at a woman who was actually disabled (instead of pretending) was very naughty. I really liked the writer's episode of Doctor Who, but this scene had me literally screaming at the telly. Maybe I should just go out on a Friday night.

Oh, and this happened: 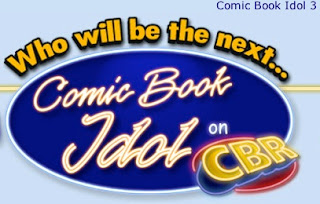 I made it through the submissions phase of Comic Book Idol 3, which means I've got a ton of work (and bowel-clenching terror) over the next few weeks. If you love me, vote for me. If you hate me, and you want to see me fail at a high-profile comics job, vote for me and I WON'T LET YOU DOWN.
Posted by Dan McDaid at 5:43 PM 7 comments: