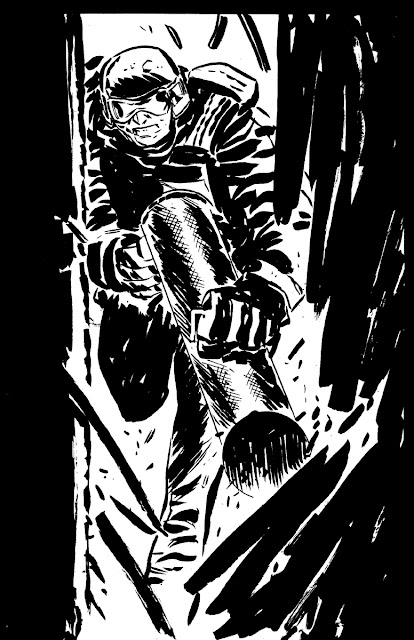 A snippet of a page from Alex di Campi's Ashes. I love drawing SWAT guys!
Posted by Dan McDaid at 10:32 PM No comments: 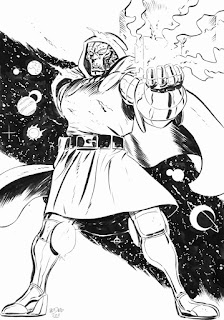 Latveria's favourite son in some borderline upskirt action. Why, you can almost see his Cosmic Cube!

She Ain't Buyin' It

A panel from Time Share - coming soon.
Posted by Dan McDaid at 11:39 PM No comments:

I completely botched today's page, so I made it up to myself by drawing Devil Dinosaur and Moonboy.

Goddamn, I loved doing this. Jack Kirby, you were the best.
Posted by Dan McDaid at 6:38 PM 2 comments: 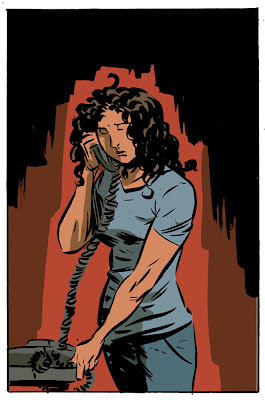 A panel from Alex de Campi's forthcoming ASHES. I've seen some of the other art in this book and I must say it looks BLOODY LOVELY so far.
Posted by Dan McDaid at 7:50 PM No comments:

Dan’s too busy to write up his visit to the Glasgow con so I, in my role as Best Girlfriend Ever, am doing it for him.

Loads of people came for sketches and poor old Dan didn’t stop all day – 40 sketches by 3pm! Suffice to say, he was knackered by the end of it, but still a happy bunny. We sold out of sketchbooks and met some very nice people - including Twitterfriends Mark Toner and Colin Bell. Here are some of Dan's sketches from that day:

Thanks to everyone who came along to chat and who bought a sketchbook. Also to Sha Nazir for organising the event and inviting us.

When I was a kid, the Transformers looked a lot less shiny than they do these days. John Ridgeway and Mike Collins' take on the big metal tramps was especially gnarly, with Ridgeway's looking almost like wood at times. I loved that - that extra bit of British texture made the Transformers mythos smaller, more mundane, but also somehow more magic. Anyway, with that in mind, I drew Optimus Prime: 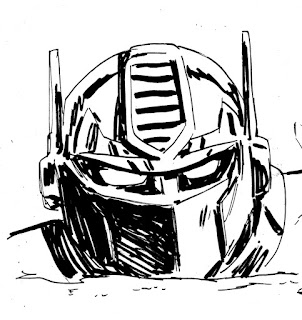 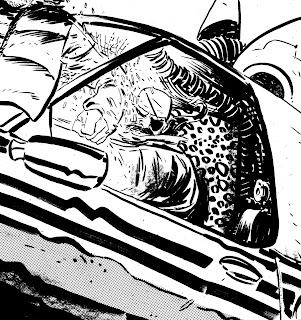 A snippet of today's Time Share work. This is me trying to get away from the - to my mind - rather fey line I'm getting from my brush at the moment. I'll probably go back to the brush at some point - I've spent too long mastering it to give up on it now - but I'm very pleased with how this came out. This bit was made using PITT brush pens, PITT superfine pen, chunky black marker, crayon and zipatone. Blimey!

The rest of the page will be visible very, very soon...
Posted by Dan McDaid at 7:36 PM No comments: