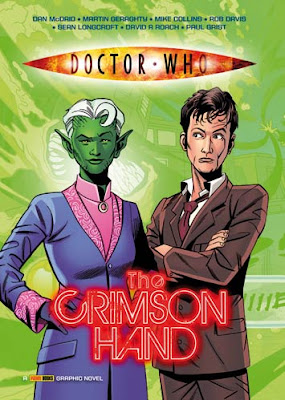 (Not final art)
So, the cat's out of the bag - The Crimson Hand, a collection of comic strips from Doctor Who Magazine written by yours truly and drawn by a host of top flight British talent (and me), is finally coming out next year. I'm totally thrilled to bits about this, for any number of reasons: primarily, it's going to be nice just to read the whole thing as a novel, with its subplots, callbacks and running jokes plain to see. While I was writing TCH, I was hugely influenced by my other half (AKA The Brains of the Operation), who has a fondness for The Great Gatsby, Gothic fiction, and the freewheeling chutzpah of mid-century screwball comedy. So all that's there, and I'm hoping that when read as one piece, all those influences and levels will have an extra resonance.

The other reason I'm chuffed to see The Crimson Hand out there at last is that I'm a writer. I don't get to do much writing at the moment - I've got so, SO many art jobs on at the moment, it's untrue - but I don't want to forget that I'm a writer, and it'll be nice to point at an object and go "See that? I wrote ALL of that."

Now. All being well, I expect the trade paperback to include the following strips from Doctor Who Magazine:

Hotel Historia (art by me)

Thinktwice (art by Martin Geraghty - this is one of my favourites)

The Stockbridge Child (stands up quite well, despite my reservations at the time. Has some lovely Mike Collins art)

Mortal Beloved (my actual favourite, probably. This is where the influences mentioned above really come into their own. Fantastic, mordantly funny art from Sean Longcroft)

The Age of Ice (another cracker from Martin Geraghty. When the pages started coming in for this, I pretty much flipped my lid - bold, slick, sexy stuff. Why Martin isn't a bigger deal in comics I don't know)

The Deep Hereafter (a story I'd been struggling with for ages finally unlocked itself in the middle of a dark and stormy night. Beat poetry, noir, Eisner's The Spirit, all beautifully drawn by Rob "yer actual genius" Davis. Something a bit special, I think)

Onomatopoeia (how many times did I have to write that sodding word while working on this strip? Bit of an experiment: an entirely silent strip, with a story told entirely through sound effects. Detailed, vivacious art by Mike Collins)

Ghosts of the Northern Line (Bloody hell! It's Paul Grist!)

The Crimson Hand (the grand finale! Even I was surprised at how well the threads all tied up at the end. More gorgeous work from Martin Geraghty, apocalyptic colours by James Offredi)

Sounds pretty good, doesn't it? Even if I hadn't written this thing, I would still be all over it. So feel free to soil your pants with excitement, because this is going to be GREAT.

Nice! I've not watched nor read anything Who-related in, um, many decades, but maybe for you, I'll make an exception. Is this coming Stateside?

Also: I feel ya on the writer-artist thing. What's weird is (as you know) I started into this comics thing as a writer, but lately I've been getting more work/accolades for my art, which is just weird to me, but I guess it's because people can more immediately see and recognize the visual aspect.

Either way, you're golden. We still need to collab on something one of these days.

The Crimson Hand sequence of stories was great fun and a suitably epic finale to the Tenth Doctor's comic strip adventures. I loved Majenta and the way she thought the Doc was HER companion :-)

Totally agree with you about Martin Geraghty: I love the way his style has evolved over the years. I bought some Fifth Doctor artwork off him about 10 years ago - the first comic art he'd ever sold, I believe. Great stuff!

Finally! Every time I go to Waterstone's I check to see if it's there; I'm a bit clueless as to release dates, but next time I should fare better :P

Hey, Isi! I will be posting the release date on here or on Twitter - or both - just as soon as I have it. Stay tuned! (as people no longer say)

Huzzah! Ever since I misplaced my DWM's, I have been waiting for this to be announced :D
Please excuse the change in avatar/hair colour :P