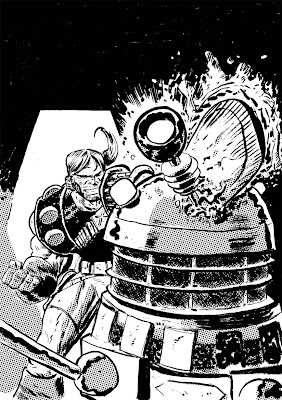 For those of you who don't know, Abslom Daak is what happens when you take Conan the Barbarian, give him Han Solo's blaster and moral outlook, and shove him into Doctor Who. I was mildly obsessed with him for a while in the late 80s, after DWM reintroduced him for their blockbusting Nemesis of the Daleks strip (and gave away a promotional "square" single featuring the big man's theme, by the, uh, Slaves of Kane). There's a school of thought that Daak doesn't belong in Who, that his modus operandi is too brutal, too *macho* for the Doctor's world. But I think that's balls. It's a big universe that the TARDIS is travelling through, and if there isn't room in it for a sweaty, pony-tailed, chainsaw-wielding maniac, then, well... that would be a shame. My run on the strip (which I wrapped the other night - please send condolences to the usual address) definitely takes place in the strange, mono world of Daak, Frobisher, Shayde et al. 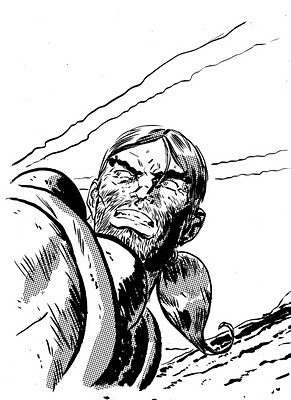 Plus, he was created by Steve Moore and Steve Dillon, which gives him an impeccable pedigree as far as I'm concerned. 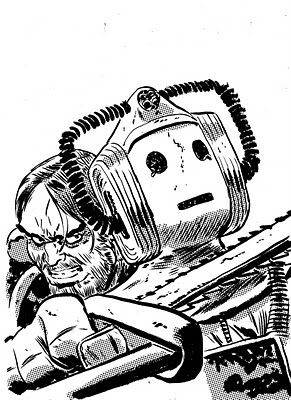 Wow! So very cool! If ever they wanted to bring him back, I think they know who to call now...

beautiful work, dan.
i'd love to see you do a black & white
comic story sometime.

I've never heard of this character, but I LOVE the idea. He may not fit into the man canon, but there's plenty of room for Daak in Dr. Who's world.

Daak VS Crimson Hand - WHO WOULD WIN???
Wait, the Hand obviously. Unless Daak has an omnipotent chainsaw :P

LiE - I think Daak would find a way! Did you notice he appeared as an easter egg in one of the recent issues. Hint - not in the artwork. :)

These are fantastic Dan! I love the *REVENGE* Cyberman piece.I gotta say though that I'd find it hard to see Daak coming back into the present Dr Who universe. He was sort of the product of the ACTION era who managed to get a foothold in Dr Who Weekly. I liked him too - the Dillon art enthralled me. I certainly can't see his level of violence in the strip now. When I brought back Kroton , when he was used in COMPANY OF THIEVES we were asked to tone him down !

These are so completely fantastic, Dan! I love these pieces so much.

They take me back to the late 80's/early 90's when I would be constantly drawing Daak killing Daleks in the margins of my homework.

These pieces are excellent, Dan. You would be perfect for a Daak comic.

Thanks for the observations on Daak, Ade. Alas, I think you're dead right. Part of the appeal of AD these days is as a reminder of what once was, and what can now never be. When *I* was a kid, Daak was the bees' knees. Kids these days are apparently soft as mush (except, of course, they're not - they've just taken their lust for violence into a place where their parents can't go - video games. Which reminds me - Daak would make an AWESOME video game).

Robert - thanks! I agree that I'd be a pretty good fit for a Daak comic (I love a bit of the old ultra-violence), but I think he's mostly a lost cause these days. Unless he's brought back as someone who kills something other than Daleks...

Oh yeah, and I loved drawing the Revenge-era Cyberman. Sadly, I was able to draw it from memory. *NERD*

I love these so completely, its not even funny. Amazing stuff, Dan!

It's hidden in one of the codes used by JUSTICE. Not in the most recent ish, but the one just before it. Good hunting!

hey man; those eyes you drew on him are amazing, really nice--even slightly tighter than usual...?

You mean on that bottom pic? Yeah, I think you're probably right! Daak was designed by Steve Dillon, so I wanted some of his precision and grit to creep in a bit. Glad you like it, sah!

I remember this from Dr Who monthly. Steve Dillon, I think. He was such a bad ass mother fucker. Daak, not Dillon.