About a year ago, I put together a sample package for 2000AD. And honestly... it was rubbish. The art was okay - it was early Jersey Gods stuff - but I was really busy at the time, and so made little effort to come up with much in the way of Dredd/Tooth-specific stuff. So, inevitably, I didn't hear back. This hasn't worked out too badly for me - with JG and Who, I'd be too busy to do much else anyway - but I have a soft spot for old Stoney Face and feel a little sad that I won't be drawing him any time soon.

This isn't what I sent to Rebellion - I drew these in the park over the weekend, based on a vague idea for a sample strip I had on the go a few years back. Working with these characters - and in a coarser, slightly wilder style - was a LOT of fun.

The putative villain of the piece, plus a futuristic bike. 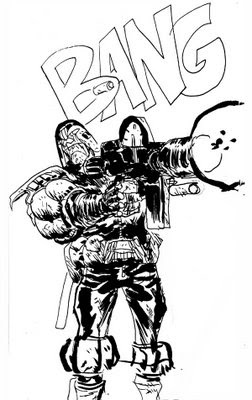 Old Stoney Face in a bit of hot Lawgiver action. Or do I mean Lawmaster? 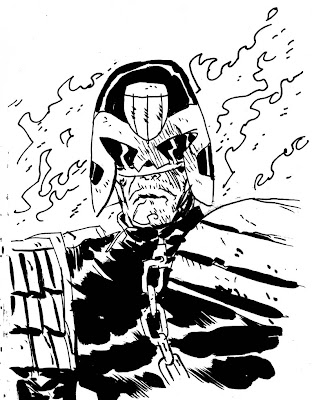 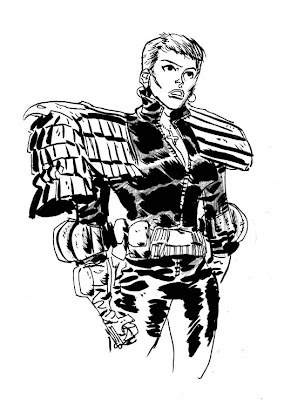 Judge Anderson, PSI Division. REALLY fun to draw. And note the cross around her neck - the last time I was seriously reading Dredd, she had gone Catholic, see.

i really like the cocked head in the "BANG" piece. Like the blast is so big he's turning his head away from the heat.

that bike is freaking sweet!

Submit again! These are cool!

And thank you Matt! When I've wrapped up my Who commitments, I might just do that...!

These are absolutely amazing!!!!
Keep up all the great work, sir.

Thanks Chris! Congrats on the Mighty gig - your teaser pic is just gorgeous. I love your style!

John Freeman said...
This comment has been removed by the author.
1:45 PM

I love it! Great stuff man.

These are awesome on a level of, "how could they NOT give you a job" awesome.

I think the best Dredd I've seen you do was a doodle on an envelope you sent me at some point. I should dig it out and scan it!

That is totally amazing! I am in awe!

I'm a huge Dredd fan and wouldn't mind seeing you pencil him professionally.