Back to the TARDIS

Hello everyone! The madmen at Panini Towers have foolishly allowed me to have another go at writing Doctor Who for DWM. Part One of Thinktwice is drawn by Martin Geraghty with colours by James Offredi and letters by Roger Langridge. It features the return of Majenta Pryce, who I created for the story Hotel Historia (see below). What's she doing back in the Doctor's life? Well, we'll see...

In the meantime: some sketches! When I send a pitch to DWM, I sometimes like to include a few illos to give the document some colour and to get across an idea of how I want the characters to look. So... 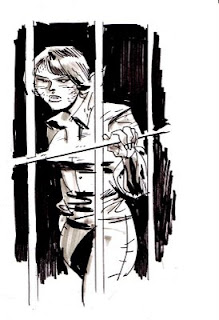 This is Majenta Pryce, as she appears in Thinktwice. Incarcerated in the space gulag, with her memory wiped. 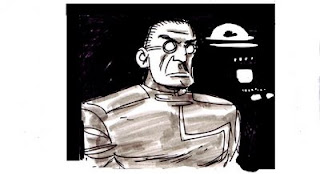 Mr Gripton, the head warden of the space prison. The cruel screw-in-chief is a bit of a cliché, but as I set out to do a proper “Doctor Who in prison” story, it made sense to go with this archetype. Martin Geraghty has done wonders with this character, giving him a big, babyish head and really pushing the “Hugo Strange-ness”. Cool. 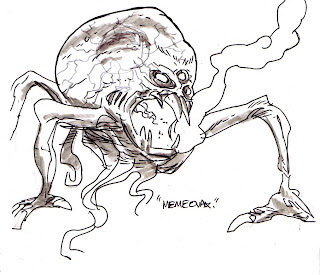 I actually do have a fannish question, for once. I did wonder: Geraghty draws Magenta as younger looking than the last time we saw her. Is this deliberate? Is this set before or after the first time we met her? Flipping timey-wimey confusion.

Mark - yes, Halo Jones was a big influence here (I think that last panel on page one is a subconscious homage to a similar panel early in Moore's strip... and Zed is a callback to that "invisible" friend from HJ - remember?), and I guess Harry 20 must be subconsciously in the mix as well. Also - some wag on OG pointed out that Majenta looked like Tyranny Rex. Which she does!

The story is set after Hotel Historia. Majenta has been banged up for a while and has lost weight/had her hair cut short, hence the younger look. Ooh, I love fannish questions. More please!

You won't be drawing it this time, Dan? I look forward to it either way. But, okay, Hotel Historia was set before Donna Noble was a companion, right? Is this set after "Journey's End"?

No, I'm not drawing it, alas. I'd have loved to but I'm a bit oversubscribed at the mo, art-wise. I'm not complaining. Or boasting.

HH was set before Partners in Crime and this 'un is set after Journey's End. Actually, directly after the story in issue 399 as far as I'm concerned. :)

having read part two of thinktwice, i now realise what the tim'rous beastie is.....

Hello anonymous. Gosh, that's cryptic - did I make reference to Burns a while ago or summat? :)

sorry about that. that was me before i got iGoogle....