Back in my game design days, I worked on something called The Black Project. It never came to anything, but if it had it would have been a sort of squad-based free-roaming shoot 'em up a la Vice City. Like Vice City, it would also have been set in the past - ie the year 197x. Unlike Vice City, it probably would have sucked.

But I always liked the "hero" character I came up with for BP. He was kind of a cool, post-hippy English badass, one part John Lennon and the rest Michael Caine. I don't remember his name at all now (if anyone from my DR days can recall this or any other details about this project, feel free to drop me a line), but he would have been cool to write for and even cooler to draw. He wore red-tinted Lennon shades, had long hair and 'burns and carried two pistols, one silver and one black (these he called Yin and Yang). Ha.

I couldn't find any drawings to show you what he looked like, so I done some new ones. 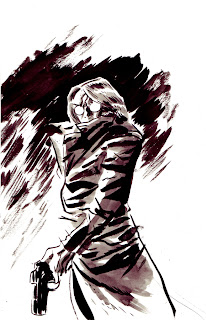 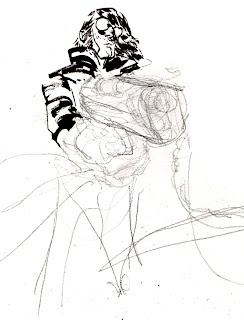 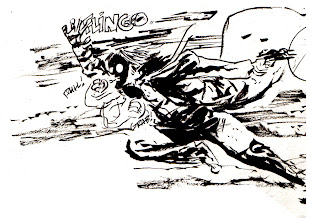 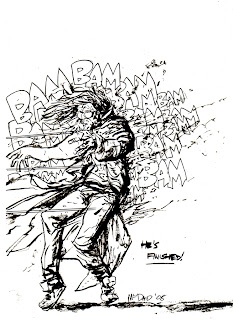 I'd like to do something with him sometime (even though he's probably still owned by the games company I was working for, and even though the whole Mad Mod thing is being pretty comprehensively "done" at the moment by Matt Fraction and Casanova). We'll see.

IN OTHER NEWS - I done something else with my Wacom tablet: 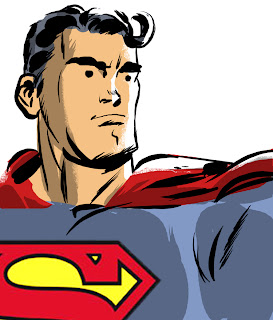 As I've said elsewhere, I love VICE CITY just a little bit too much, so much that there's a little bit of me that's now forever Tommy Vercetti.

Nice stuff Dan!!! I definetely need those red glasses too...

I love these drawings. They have so many great qualities to them. I would have to say the He's Finished piece is my favorite, but definitely a great character to work with. Were these done in ink with brush? Beautiful Work!
~Manny

Mark, I *still* go back to Vice City from time to time, if I want to drive around a pink city in the middle of the night while listening to Jan Hammer. ah, good times...

Fede, thanks. Actually, it would have been cool to do the shades red in the pic as well... Might have to go back and do that.

Manny, thank you very much! I really enjoyed doing that pic as it's a bit of a departure from my usual clean, slightly cartoony work. I pencilled it on cartridge paper, then instead of rubbing out all the extraneous lines I just decided to ink every line I'd drawn with the pencil to give it a cool, jumpy look. And I stole the sound effect design from Paul Pope (who's the master of this kind of loose, confident brushwork).

Yep, done with ink and brush. Cos I was using quite rough cartridge paper the ink dried very quickly on the brush, which gave me the opportunity to get some nice effects and really push my inks. Glad you like it.

Nice artwork! Thanks for sharing!
This superman has the funniest expression on his face :)

oh wow- yeah, ViceCity is my only....vice? I effin' love that game. I've never actually played the game to win it. Generally I turn it on, punch in about 10 cheat codes (unlim ammo, body armor, and turn into a hooker) and go bedlam on OceanBeach!

That last shot of his getting blown to pieces is really great. It has a great clasic feel like the Romitas or Buscema (all of which i love)

I think he was called 'Matt Black' or some such?