Right, so, this thing was two weeks ago, and in the intervening time I have seen several films, been drunk twice, and done a bit of work - so my memory of the event is now not as fresh as it was. There is a possibility that some of what I'm saying is misguided, broadly inaccurate, or entirely made up. Apologies. 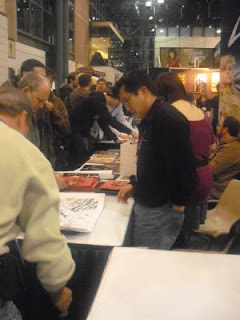 I think this is day two. That there is Frank Cho. And this: 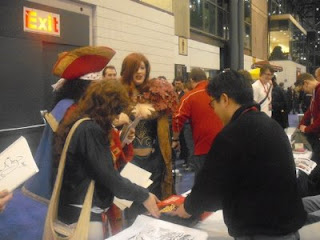 Is Dawn. Are they real? The missus and I could not decide. I'm going with yes, cos that verdict makes me happy.

Alright, that can't be from Day Two, cos this: 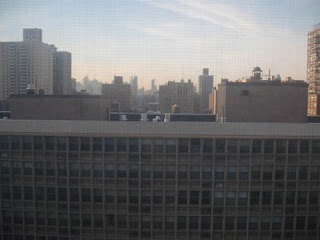 is the beginning of Day Two. Our view from Cecille Brunswick's window. I think this building, for all its utilitarian ugliness, is kind of grand in a way. 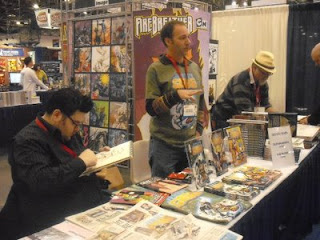 Setting up. Pictured: Me and my stomach (drawing a Savage Dragon and probably getting the fin wrong), Glen Brunswick, Rollickin' Richard Starkings. A real gent, who fixed me up with a ton of Elephantmen goodies and a badge! 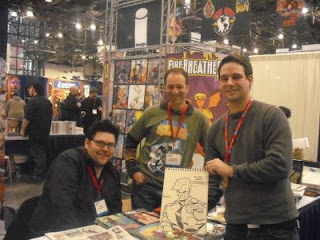 The finished article and it's owner. If you're out there, remind me of your name - I want to say hi and thanks for stopping by! 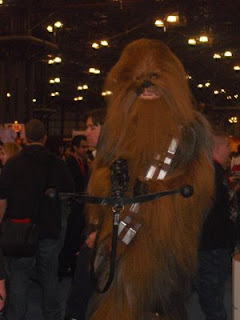 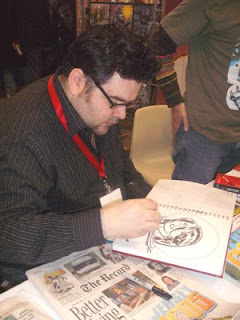 One of my favourite sketches of the weekend. I really want to do more of Zoe in a Wally Wood-style spacesuit. Glen? 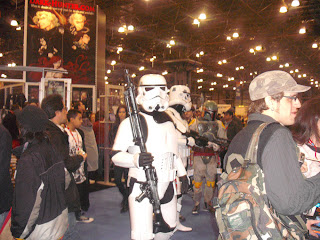 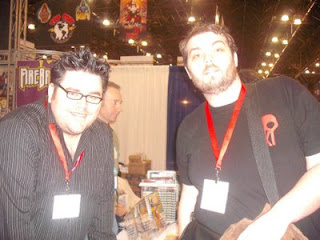 Sean Witzke - what a cool guy! Sorry the flash obliterated most of your features... 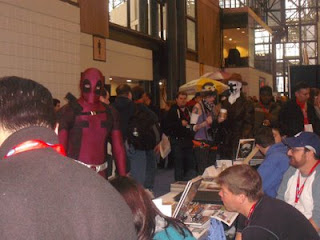 I love this picture. It looks like Rob is examining ol' Deadpool's costume to make sure he's got it *just* right. 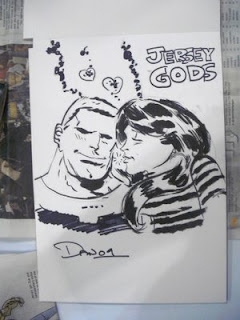 I messed up Zoe's forehead here, but this is otherwise pretty nice. I haven't had much of a chance to show Zoe and Barock being really cutesy, so this was fun. 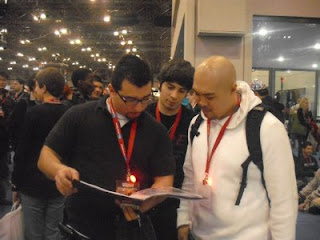 Three cool Jersey guys, getting a sneak peek at either issue 2 or 3. They were so excited about this book - we got a lot of this kind of attention over the weekend, but these guys were among the friendliest. 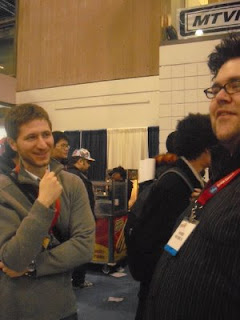 Niko, me and my stomach. Hey, Niko! 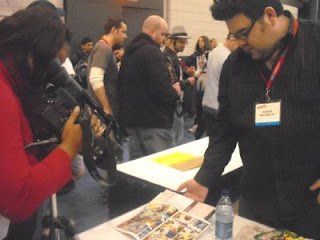 Out of the blue, we were interviewed by NY1 for New Jersey. I was on TV! In America! Here's me helping erstwhile NY1 reporter Tamani Wooly by holding up a copy of issue one. Wahey! 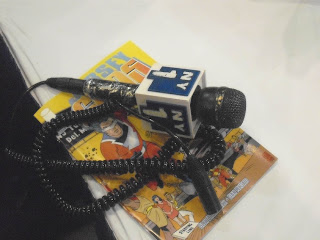 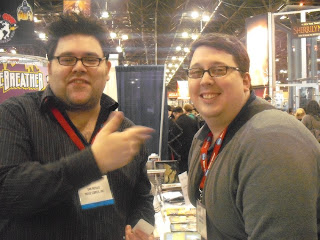 Now who's this handsome bastard? Kevin Goddamn Church, is who! He made me laugh A LOT. 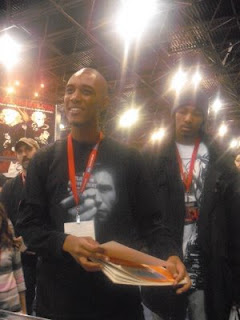 Greg Anderson! Such a nice guy - he furnished me with a bitchin' sketch of Helius in return for a Two-Face doodle. Thanks Greg! 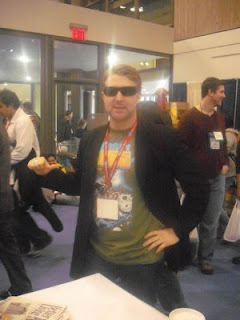 Nathan Edmondson is one handsome buck. And he is *really* wearing that Jersey Gods t-shirt. CAT NOISE 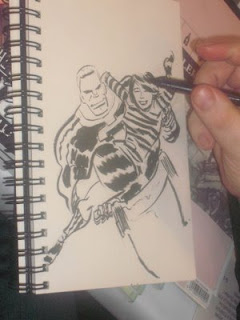 Another nice Barock and Zoe. I love their expressions - he really is kind of a tight-ass, isn't he? And wow, who knew fingers could get so sweaty. *gorge rises* 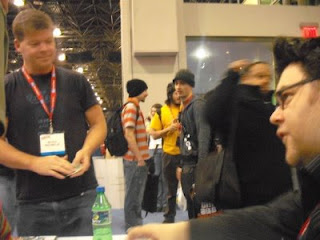 Rob Liefeld. Right at the end of Day Two (my last day at the con - day three was spent sleeping and wandering around Central Park with sandwiches), Mr Liefeld came bounding over to see the Jersey Gods for himself. So baffled and starstruck was I, I kind of mumbled something stupid at him - though luckily he wasn't really listening. He doesn't stop moving! Check it out: 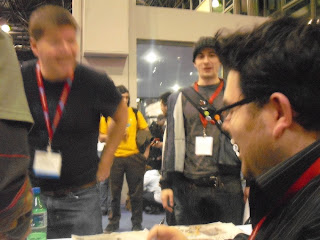 Anyway, he's probably gonna do a variant cover for us. Wait, what? 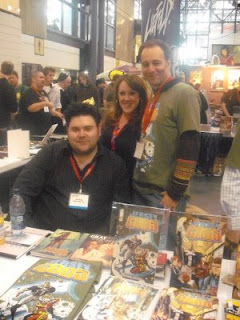 The Team Supreme! The only one missing from this scene is... 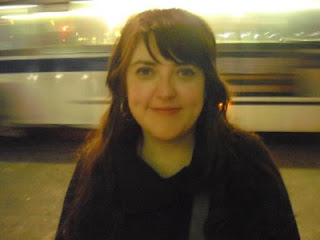 THE MISSUS! Ain't she darling? Look at those dimples! MWAH!

Anyway, this is just a fraction of the shots we took - there'll be a flickr set up soon enough, so keep your eyes peeled for that. 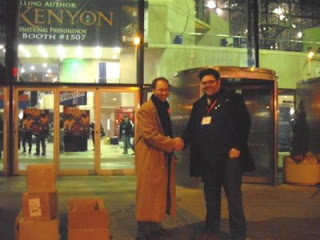 I hope I've managed to convey even a little bit of the excitement I felt being at NYCC - it really was one of the most amazing times of my life. I met a load of great, talented, funny people, bagged some incredible swag, and was generally made to feel like a prince. For all the downsides of being a freelancer - being stuck indoors a lot, hardly seeing anyone and having skin that's the exact colour of a murky wintry sky - this sort of thing is an enormous upside. Eric Wight is trying to convince me to go to San Diego - what do YOU think?
Posted by Dan McDaid at 5:34 PM

very sweet pics there dan - and that is funny because that is about as good of a picture i have ever seen of Greg and we have been buds for a couple of years... ha ha

great stuff and thanks again for my sketch that you did

My pleasure Mr Hed (or can I call you Brik?). And yeah, Greg Anderson is a bit of a stud-muffin in real life. Actually, American is chock-full of good-looking types... must be somethin' in the water.

Oh wow, haha! Thanks for the kind words, Dan! And I didn't even know you guys took a photo of me so I was taken back when I scrolled down and saw me, lol. Thanks for the Two-Face sketch, it's beyond bad-ass. I'm so gonna get it framed, you can guarantee that! 8-)

i wonder if they had anything IDW there....

Love the play by play--really felt like I was inside you; er, I mean with you (I know, I know, you requested no more of that sort of talk). Sorry.

Really happy for you guys. Let's share a table sometime!

I think I mentioned it in the comments on the previous post, but I do INDEED think you should attend San Diego! I will bring you artwork if that'll help?

Although San Diego is a lot of chaos, but it is one of those shows where you go and you can meet just about anybody, last time I was there I met Neil Gaiman, Peter Mayhew, Kevin Smith, Stan Lee and I don't remember his name but he created Afro Samurai. That was all in about a 1 hour period. Extend that by four days and you'll get the picture.

GO to San Diego!Whether the show is there or not, it's a super place too. Trust me!
I loved the pic of Debs. She looks beautiful - she should be proud of those dimples!

dude....let me just say, I'll see your ass in SanDiego!! If you can make it, of course.

Dude, go to san diego!! spread the testament of the jersey gods!!