Notes from the TARDIS - the Stockbridge Child

Of course, I'm not just working on high-profile Image books. Oh dear me, no. If you've been following the blog for any length of time, you'll also know I'm writing the comic strip for the UK's DOCTOR WHO MAGAZINE. And it's going pretty well, I think. It's hard to tell really - the DWM strip seems to exist in its own little bubble, away from the scrutiny of yer Rich Johnstons and yer Heidi McDonalds. So the only feedback I get is from my editor(s) and a single, solitary thread over on the doctorwhoforum. People seem to like what I'm doing well enough: some people don't like Majenta that much, some people positively adore her. Ha. She's a tough character to write at times - motivated by self interest, and with absolutely no interest in the Doctor's adventures or being "good", the trick is to come up with mechanisms to pull her into the plot without seeming contrived. Sometimes, I've pulled this off - other times, less well.

Which brings me to The Stockbridge Child. This was published over the last three months, and is the second story in the arc. And I can't lie - it was a bit of a nightmare to write. The script itself - no problem. But hacking out something that looked like a workable plot, that was the tricky bit. I think my main problem was the setting - if you look back through previous Stockbridge stories, they tend to start in Stockbridge, then head out elsewhere. The Tides of Time takes us across the Universe, Stars Fell... takes us into the bowels of a haunted spaceship, Endgame into the Toymaker's surreal lair and so on. When it came to creating something fast-moving and comic-booky, Stockbridge just didn't fire my neurons - it's too flat, too small, too ordinary (This is nonsense of course: a really great writer could have done something great with the same setting, I'm sure).

And then there's the Majenta problem. She has a mission (sorting out her brain), so has no interest in "local disputes". That's fine, and very funny, but she's still the Doctor's companion, so she has to get pulled into the story somehow. The trick, I guess, is to bring her self-interest to the fore - in Part Two she saves her own life by offering the villain the TARDIS. This tactic, inevitably, blows up in her face, and she ends up tied to a monument in the town square as bait for the Doctor.

Not the most satisfying solution, but it worked well enough. And to get around the Stockbridge problem, I cheated a bit in part two and took the Doctor and Max away from the village and into the wilds of another universe. Bad Dan!

Anyway - How about some pics? 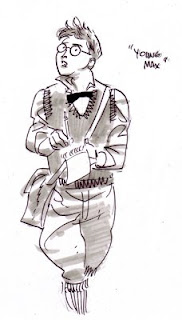 This is young Max. In an earlier version of this story, the setting was the late fifties, and Max was around twelve years old. He would help the Doctor stop a Mosley-style fascist conquering the UK with some sort of evil power gem... thing. This version of the plot had some merits - I loved the sunny, nostalgic, Boys' Own setting - but I couldn't make it hang together at all. 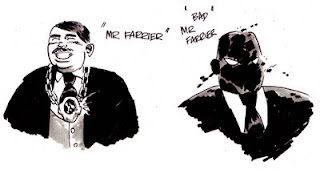 Mr Farrier, the villain from that earlier Stockbridge story. He was, of course, a racist, and the power gem thing made him go all black and evil and...ah. As you can see, I was on pretty shaky ground here. 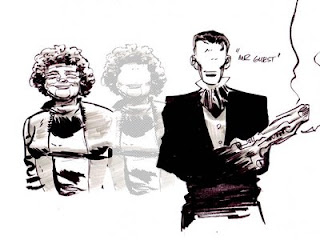 Mr Guest. This is from another version of the Stockbridge story (I think I did about six different Stockbridge stories before settling on TSC. This one involved numerous Max Edisons and a hundred parallel universes and some daft device called the dimension key or something. Sigh). He was the leader of a group of shape shifters called Verisimuloids. I still like the design quite a lot and will probably end up using him somewhere. 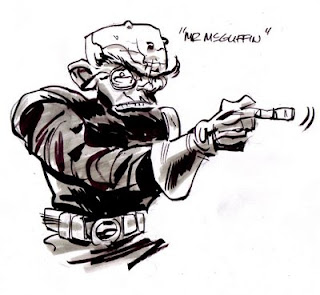 Mr Maguffin - the baddy in this second version of the story. I'm determined to get him in somewhere!

And that's it for The Stockbridge Child! Well, sort of. Hey, I have to save something back for the trade, don't I?

Verisimuloids!?! Cracking stuff! I much enjoyed The Stockbridge Child too.

Ha! Yeah, Verisimuloids. I'll definitely use these bad boys somewhere else eventually. Thanks for enjoying Stockbridge Child - I'm not wild about it, but it has some nice bits.

you seem very determined to get Macguffin in ther SOMEWHERE, eh?

Well, that would be telling wouldn't it? :) It's not Mr Maguffin though, I can tell you that much (he is probably not going to turn up in Doctor Who now - I might use him somewhere else, though).

I may have to draw Madge and put it on my DA at some point....

I quite like Majenta!
But I've got a question: will we ever have a comic strip (or a book) with Ten II & Rose's adventures in Pete's world?

sunnytyler - no idea, love. There's an excellent chance that someone at Who towers will want to revisit that rather odd pocket of the Doctor Who universe. A great way to have a Two Doctors-type scenario without crossing the timelines, n'est ce pas?

Marco and Paul - thanks very much! McGuffin was largely responsible for me getting the Who gig in the first place, so I owe the weird little fella a lot!