Hello, we're back. NYCC was just fantastic, New York is beautiful and bountiful, and it turns out I might be some kind of genius. No, really.

Alright, hyperbole aside - the whole damn this was amazing. I didn't get to see much of the con other than our table (a fairly common situation, as I discovered. It was *staggeringly* busy. Also, our table did so well, it was hard to get away). But I did get to meet some fantastically cool people. I met:

Rachelle Rosenberg (adorable), Eric Wight (hero), Richard Starkings (I'm not worthy), Dean Haspiel (swoon), Joe Infurnari (genius), Adam McGovern (the Kirby King), Kevin Church (?), Benjamin Birdie (tired but happy) ,Josh Williamson (borrowed my sharpie) and Vinnie Navarette (gave me Dear Dracula), Nathan Edmondson (awesome), Jonah Weiland (boundless source of energy), PJ Holden (wired), the Image boys (including a phenomenally unwell Eric Stephenson) and a ton of talented, enthusiastic artists and writers. And, of course, Mr Rob Liefeld. Liefeld came bounding over to us at the end of the second day to tell us he loves the book and is gonna do a variant cover for us. I was so astonished by this development I MIGHT have said the following "buh... wuh... nuh?" Or words to that effect.

The Missus took a ton of photos, and we'll be putting those up on that Flickr soon enough. But in the meantime... 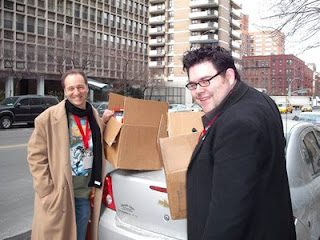 Glen Brunswick and I, preparing to set off for day one of the con. Americans always know how to look good in a photo. Pasty, overweight Brits - not so much. 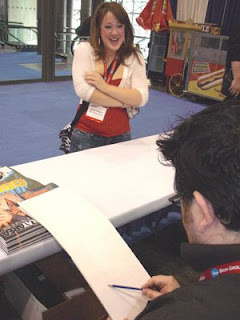 Rachelle and I hit it off pretty much straight away - in that we immediately starting teasing the fuck out of each other. This is me drawing her a pic of the Human Torch - my first con sketch! 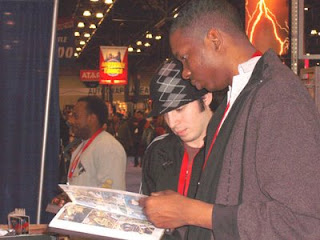 A couple of Jersey guys getting a sneak peek at issue two. We had a LOT of New Jersey interest, way more than I had imagined. And a lot of media attention too - including coverage in three Jersey papers and on two TV channels. Glen has the relevant links HERE and HERE. 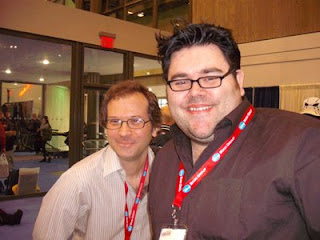 Adam McGovern and me. Due to tiredness/head cold I was entirely unable to raise a genuine smile the whole weekend. Bah. But Adam was great fun, and we had a good long chat about Fred Van Lente, Hercules and any damn thing. Cool. 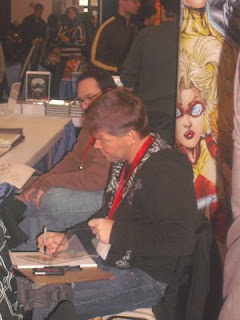 Rob Liefeld. He was sitting not three feet away from our table. My girlfriend became strangely fascinated by him. He has that effect on people. 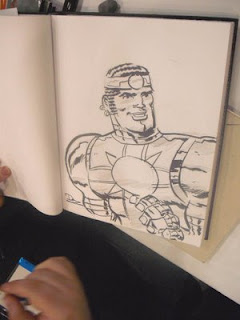 A sketch of Helius. He looks pretty cool! I like doing sketches and giving them away - it gives them a nice, transient quality which appeals to me. 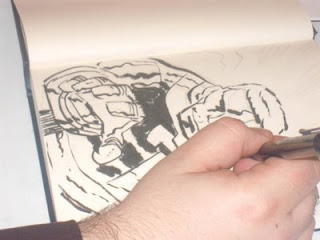 Barock. I drew variations on this pose quite a lot over the weekend. 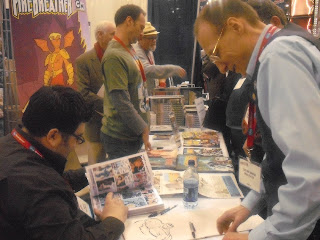 This is Yves. He was seriously, and with no bullshit, the best artist I saw all weekend. I think he was trying to shop a few things around and wasn't having the easiest time of it. Any sensible publisher would snap him up for an exclusive contract tout suite. Such a nice guy as well. 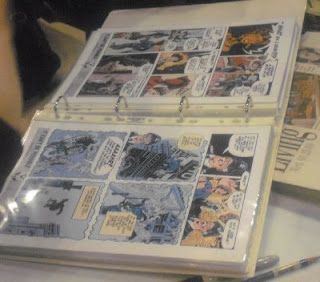 Some of his work. Kind of a nifty Eisner/Robbins vibe. Beautiful. 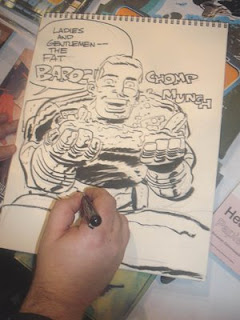 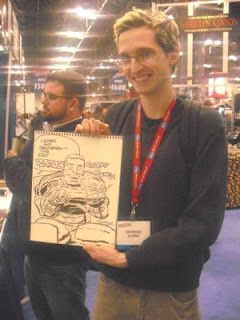 Jon Benfield here came up with a neat idea for a sketch. I'm not sure I understood it *exactly*, but as far as I can tell, they have this place in NJ where if you eat four of their ludicrously enormous/calorific sandwiches, they name the sandwich after you. So here, Mr Benfield is holding up "THE FAT BAROCK". I also have a great pic of Glen staring at this sketch with unalloyed envy in his eyes. Tee hee!

Ha! So awesome! Was fantastic meeting the Jersey God fam! Hope you enjoyed the drawing. I ain't much of an artist but was fun to get it done. Thanks for putting me on the stop, Dan! lol

great stuff - as soon as my sketch arrives I will scan it and post it up for the world to see... i am excited and appreciate the above posting Greg Anderson for hooking me up.

Hey Dan! Glad you had a great time and that it went so well for you. So sorry I didn't get a chance to say hi. I was hanging around in the booth Friday and Sunday, but when I asked Glen about you, you had already left. :( Next time sir!

Greg, your drawing kicked arse. I will be putting it on the blog over the weekend. And it was ace to meet you!

Brikhed - cool beans. Rachelle is the nuts, isn't she? But don't tell her that - she'll only get a big head...!

Andre, man I'm gutted we didn't get to hang out some. I hardly had a minute away from the table, so it would've been difficult to find you. But you'll be at NYCC again, right? I think a few post-con drinks might be in order...

Wotcha, Mr C. It turns out that Yves is probably some kind of legend (he has a Lambiek entry and everything). His name’s Yves Ker Ambrun, he has stuff over here: http://www.comicspace.com/yka/ From talking to him, you wouldn’t assume he was such a big deal, he was so humble and thrilled with the praise I was heaping on him. We might try and get him for a pin-up at some point (and I think he invited me and Deborah to stay at his house in Germany, should we find ourselves out that way. Seriously - a class act).

funnily though, i was looking at another artist i like on deviantart and someonesaid they were "grokking" their comic (i'm gonna assume this means that they like the comic, not that they are turning into wyrrmen and having thier lifeforce sucked out by it oh goodness Lordi is rabbitting on i shall stop now)

I have never went to NYCC, but it looks like you had a GREAT time! I am going to have to see if there are any possibilities of a sketch swap if you end up going to SDCC. You also might have to swing down to the DrawingBoard sketch session at San Diego, that is if you are heading that way (which I do hope so).

Can't wait to see more postings and I am now going to have to go check out Yves' work...