Blistering barnacles, I'm itching to tell the world about this thing that I'm working on with "Glorious" Glen Brunswick! But Glen (and our publishers) want to do the publicity right, so I can't very well blow the whole thing open here, can I? All I can say is it's gonna have a distinct Kirby flavour (natch), which is why Glen gets that "Glorious" handle (a wee riff on Glorious Godfrey and the jokey Stan Lee-isms of Silver Age Marvel)*. And also that I'm halfway through issue two and it looks, I reckon, pretty cool. When it's common knowledge I'll post up some designs and other bits and pieces and you cats can judge for yourselves.

So, let's forget that for the time being. What else is on? Oh, there's that other thing I can't talk about yet. The Doctor Who thing. I can probably say that I'm writing some stuff for DWM - that should be alright. My next script contains the words "Baron Greenback", "Loligo" and "Boomerang". Among lots of others. When it's out, I'll put some design sketches and maybe some bits of script up on here.

In the meantime then...

For Kyle Latino, Orson Crandall from Iron Fist. A real quickie, but I like this okay. He's way cooler in the actual book though. 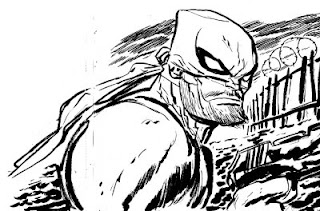 Because I'm a sucker for a) all things eighties and b) anything Marvel UK, here's a Death's Head: 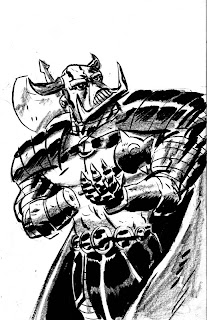 An' finally, Debs coloured some old sketches I did. I gave her minimal instruction (just a little basic photoshop jargon and some very broad shading tips) and let her get on with it. They look cool! I really dig some of her decisions here: the little light on Hulk's face, the neat offset colours. It's pretty hip. 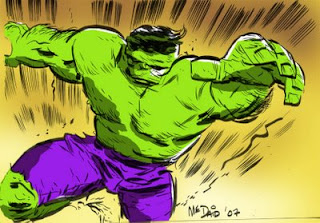 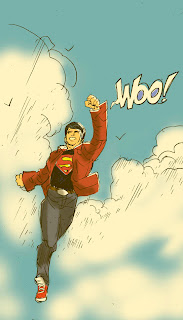 *I'm "Dynamic" Dan McDaid by the way. If you knew me better, you'd realise this was pretty funny/ironic/inaccurate.
Posted by Dan McDaid at 12:38 AM 2 comments:

Wolverine versus some ninjas. I did this with Wacom tablet as a warm-up for some games work I've got coming up. I'll post sneaky previews of this as I get through it. 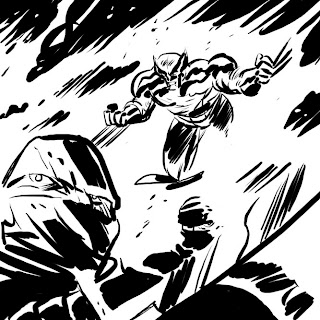 Wacom tablet and photoshop and wasn't Doctor Who good tonight? A real cracker I thought, and the best of this run so far (with Fires of Pompei a close second). But hey now, what about that Next Time trailer? Delicious stuff. What's on Donna's back? My guess - one of the Spiders of Metebelis 3, last seen in Planet of the Spiders. She's got previous with spiders, of course. I hope I'm right!
Posted by Dan McDaid at 11:30 PM 1 comment:

Yo. I've been tagged by Mr Mark Cardwell to do this: 'List seven songs you are into right now. No matter what the genre, whether they have words, or even if they’re not any good, but they must be songs you’re really enjoying now, shaping your spring. Post these instructions in your blog along with your 7 songs. Then tag 7 other people to see what they’re listening to’.
Right you are, then.

1. MGMT. Time to Pretend. Bloody ubiquitous, yet oddly still rather niche electro-indie warbling. Utterly pretentious and overblown, but utterly love with it (even if it was used to trail George "Useless" Lamb's execrable 6Music show recently). It won't embed, but see here: http://www.youtube.com/watch?v=XVnRzEjpUmE

2. Deacon Blue, Dignity. Terminably unfashionable, probably even at the time. But I'm moving back to Scotland soon (despite being a soft English puff at heart) and nothing says Scotland like this windswept, melancholy yet oddly stirring number.

3. Depeche Mode, Just Can't Get Enough. By contrast to number 2, this one feels so "London", it hurts. Chilly, romantic, kind of gay... it's the perfect music to propel yourself through Camden Town. To. And bits of it sound like they're from the soundtrack to a Sinclair Spectrum game from 1986, which is all to the good.

4. Tyga and Zyntherius, Sunglasses at Night. Speaking of... this comes on my rather rangy old MP3 player, and suddenly I'm walking around like I'm in a videogame. Not one of the nice ones either, one of those doomy fin de siecle jobs where points are scored by killing hookers with a hammer. Bloody brilliant.

5. Roxy Music, Virginia Plain. Oddly, I don't think I even heard this before I saw it spoofed on Big Train a few years ago. I've compensated for that loads since then, of course. Probably my favourite ever song, at the moment: fantastic lyrical jiggery-pokery plus top sleazy Ferry delivery plus some expert keyboard business from Mr Eno equals brilliance - and I love the way it seems to come in from some distant point on the horizon. Won't embed, but hey now: http://www.youtube.com/watch?v=_zoi6O-cq9I

Hard not to picture Kevin Eldon singing this while dressed as Chairman Mao though:

And if you're puzzling over the (ace) lyrics, here's a comprehensive guide. God bless the internet: http://www.sauna.org/kiulu/powder.html

7. Dexys Midnight Runners, Because of You. Or as it's better known, the Theme from Brush Strokes. It's a thing of delicate beauty anyway, only enhanced by its association with a bittersweet sitcom from my youth. And it's "our song" if you know what I mean and I think you do.

Alright, that's me lot. Who's next? Maybe Jay, Roger, Carly, Fred, Francesco, and Mattcrap would like to have a go?
Posted by Dan McDaid at 12:58 PM 3 comments: 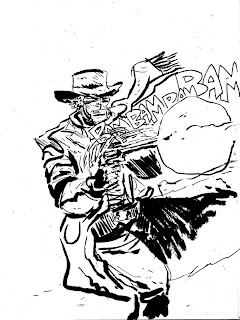 Drawn with brush and PITT pens, in m'sketchbook. Yee-haw.
Posted by Dan McDaid at 12:32 AM 4 comments: