DOCTOR WHO FANS! You might be interested to know that Rob Davis has posted our DWM strip over on his blog. It's called The Deep Hereafter, and it takes the Doctor (and his then companion Majenta Pryce) into some distinctly Will Eisner/Spirit-ish territory. 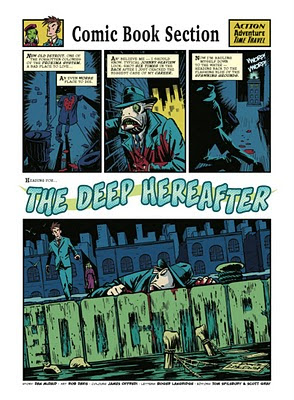 I had a ball writing this one. I'd planned my tenure on the strip like a season of the show - start off with a speedy romp to introduce (or in this case reintroduce) the companion, then a couple of small adventures where we seed in some of the arc beats; a tentpole story with a returning baddy (a la The Sontaran Strategem, Daleks in Manhattan). Follow that with a couple of weirder, more experimental instalments, then back in time for tea and doomsday. The Deep Hereafter, as you can probably tell, was one of the weirder ones - a love letter to noir in general and The Spirit in particular. It's one of my favourites, not least because Rob Davis produced such stellar visuals. He grabbed the Eisner idea and ran with it as far as it would go. 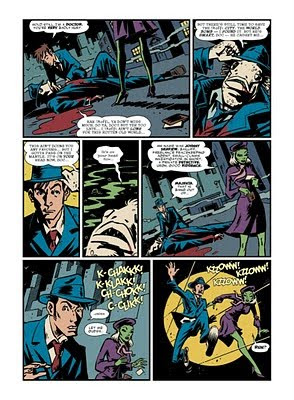 Ah, it's a lovely looking thing. Thanks, Rob.

I loved this comic. It's been my favorite from DWM for years.