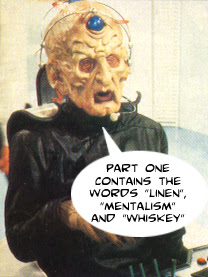 Cheerio!
Posted by Dan McDaid at 1:21 AM

When you find a partner who doesn't mind the collecting of "childish" things... keep them.

You have storytelling talent and are a super fan of Dr Who. It seems like perfect combination to me. I wish you continued success.

Hey Dan! Long time, no speak.....sorry for losing touch. Just Googled you and found your blog. It's greatly funny and your artwork ace as ever. Give me a write at web@jeffwofford.com. I'll write you back from my personal account then. I'm sad at heart to have lost touch for this long.....PLEEEEASE email ASAP, dear!

Hellllooo, Ann-onymous! I will be in touch v. soon!

Wow.... Dan, I can only imagine how exciting this is for you, knowing how much of a fan you are. Your work on here is incredibly strong, really really glad things are going so well.

Gorsh, this is like a mini reunion.
Why are you still at DR?
What are you working on these days?
How have you been!

*breaks out the reunion bubbly

I'm good. About to work on some really cool stuff that I can't talk about.. infinitely more attractive than the day-job as is, or until the end of next week anyway.

Dan, email me so I can reply. I've still got your stuff safe and sound.

Lawks, you turn your back for five minutes and all your old pals gather, er, behind your back. Thanks for the kind words Sarah: it is, of course, extremely exciting, but like all exciting things it's also often rather challenging! But that's what we're all after, isn't it? In related news: boo to Deep Red, but hurrah for new horizons! Email me at danmcdaidATyahoo.co.uk and we'll talk over it further. I frankly can't believe you've still got all my old stuff: how exciting!

Matt! I am excited! Excellent Ludo impression! Will email you shortly!

OK Guys.....I'm thrilled to hear from you, Matt and Dan!!! Thrilled! You have to understand that with three little ones (well....Liam isn't so little anymore!) underfoot, time on the computer is limited and even rare some days. Will respond to your emails immediately though!!

Hi Dan. Are you Dan McDaid from Camborne that used to hang out with some dickhead called Ross, who also used to go out with your sister? If you are then write to me at rosstowns@hotmail.com dude. If not then sorry, I´ve been stalking the wrong person.

Ross! It's been a million years.
Yes he is that Dan. I'm that Matt that used to share the flat with him.

How have you been?

I did a search for you about a year ago to see what you were up to, but I thought your name was Townsend for some reason.

Do you still have short hair or is it really long again? And are you still listening to terrible heavy metal music?

wooooooah, it is you guys. I googled your name after Lorna put some pictures of Dan from back in the day on Facebook.

Matt, you look well different, like a proper bruiser.

I´ve been living in Spain (Mallorca, to be precise) for the past year or so, volunteering for this conservation NGO. I´m nearing the end of that so in September I´m gonna be moving to Málaga with my girlfriend, who is from Andalucia.

My hair length has fluctuated a lot in recent years, but now it´s settled in a shaggy-from-scooby-doo style mop, except not ginger. I do have a beard though, and that is quite ginger.

I´m really glad that i managed to reach you guys. It´s so great that we live in the 21st century with the internet and all this futuristic shit.

Dan, I´m really digging your artwork. The style is still unmistakenly you but fuck man you´ve diversified a lot as well.

Keep in touch you guys!

I think Dan keeps his friends because he owes us all money.

Ross, I like to imagine that you still hold your hands like guns when you talk. And that makes me happy.

Dan, hurry up and do some new stuff!