*Breathes heavily through mask* WELCOME MY FRIENDS. I AM COCKNEY ROMANY POSH BOY BOXER BANE. YOU CANNOT SEE ME, BUT I AM CLUTCHING MY LAPELS AS I TYPE THIS. I AM TYPING THIS WITH MY FACE. SOON I WILL TAKE GOTHAM AND BREAK THE BAT 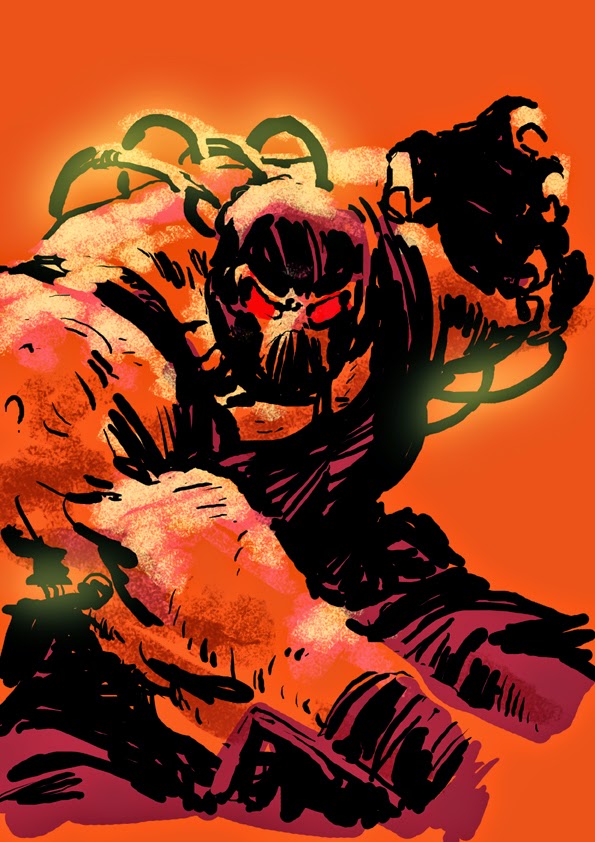 This is the Knightfall/early 90s model of Bane, drawn from memory. I think I’ve always been fascinated by Bane, though he’s patently an absurd character: an all in luchadore style wrestler with a Very Special Episode/Just Say No message tacked on for some reason. He’s not just bad for Batman, kids, he’s bad for YOU. Just say no. To Venom. If there was a drug called Venom, no one would touch it, let’s be honest. And head for the streets of any provincial British town you’ll be see a horde of would-be Banes, all henched up on creatine and determined to “smash” a “bat”. That’s the key, call it Venom in the labs if you want, but when it’s out on the streets call it something positive like “Make Be Strong” (MBS for short)

It’s Bane Week on the blog! I’ll draw a Bane a day, a different version a day. I think there’s at least five or six extant Banes running around, and if I’ve got time I’ll draw them all. We’ll start with this guy – Prime Bane – and go from there.

Labels: bane week, soon i will break the bat