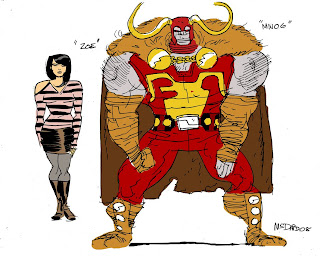 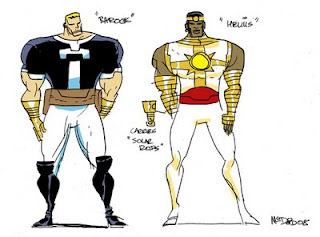 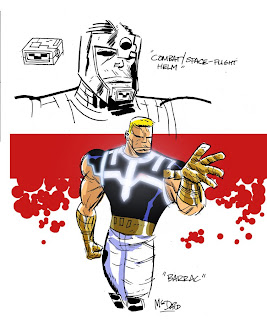 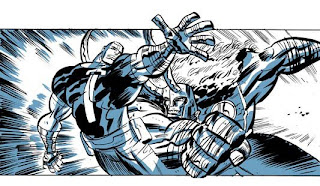 Love the two-tone image, that's what being brought up on IPC comics annuals will do to you - those and CASANOVA I suppose - but yeah, superhero comics should always be in big bright colours, I reckon.

you continue to show us a lot of goodness... spoiling us rotten and i love it

I love that space helmet on Barock. How on earth did you design such brilliance? What a pity you couldn't have kept that. :)

Thanks chaps. Mark, I really think the single colour thing tickles some nostalgic gland in my head (wow, that came out weird...). Marvel UK comics were largely printed that way when I was a kid - loved it.

Brikhed, I'm thrilled you're so into it. I hope the book does your excitement justice (don't worry, it will - I've seen it and it's awesome).

Glen - I think the problem with the helmet is that it was *too* awesome. Every time I tried drawing it, I would be overwhelmed with celestial music and the art board would catch fire. If I'm feeling *very* daring, I'll post your original design up on here very soon...

I love seeing these designs. And yeah, Capn' Britain's boots do it for me, too!

As much as I like simplified color (or, in your case, colour)--I really dig the glow on his shirt.

I smell a bit of sarcasm in here. Acute senses, y'know?

Andy - me too. Might have got a bit distracting if we'd had it on all the God characters, tho, which is why I ditched it.

Glen, I'm just pulling yer chain, man! :) I genuinely regret leaving out the space helmet - it would have given him another cool prop. And I loved the little mother box style communicator in his chin. If we ever have him travelling in time or hyperspace or some "weird" dimension, I'll definitely bring it back in.

The two tone stuff is a treat but the full colour work is just Amazing!
I love Barock's glowing shirt, make sure they use it in the movie. (they'll be a movie one day won't there?)

Warwick, production on the Jersey Gods movie begins next month, in Scotland, in my back yard, with a cast of two and an effects budget of 6p. It'll be the sleeper hit of the year!