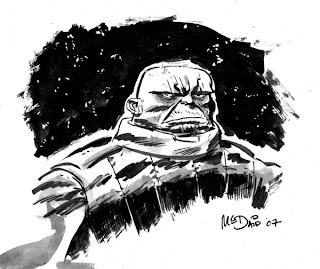 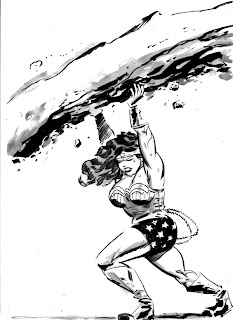 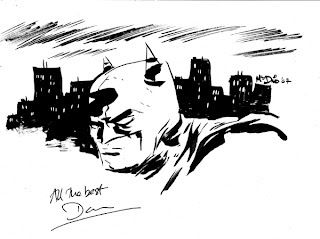 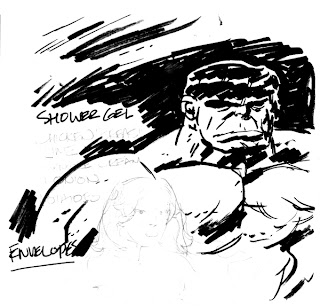 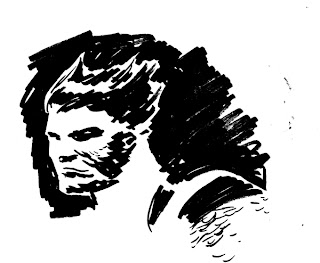 Yeah, that's what a Sontaran is supposed to look like, complete with quilted uniform! Plus that face has got plenty of character, as opposed to looking like a spud that's been abandoned at the bottom of the fridge for too long.

But more importantly - is this a Doctor Who script you've written, or are you swapping from midfield to centre forward?

I'm not crazy about the new Sontarans, I have to say. Not fearsome enough! But it has to be said, with the exception of their very first appearance, they've *always* looked a bit wonky. Too tall, too shabby, too cockney... The new version at least looks well-made. The best Sontarans, of course, were in the comic strip: Dave Gibbons draws a mean spudhead, with Mike Collins a not-too-distant second.

Yeah, my Diana Prince is good and meaty. I'm not mad keen on that sketch but I was on a real inking jag today so I couldn't resist. Look at those thighs!

Yep, the script is all mine. It contains the words "Dalton", "security" and "bailiffs". I'm pretty pleased with it. Nothing scheduled yet, but it's almost certainly going into the mag sometime next year.

Cool - I've now bought two issues of DWM in a row for the first time since 1984 thanks to your scripts (and intend to get the last part soon), but it'll be great to see you get a crack at the whole enchilada.

Did CBI have anything to do with Pannini giving you the drawing gig? It's been a hell of a showcase.

You rocked the house at CBI3! I cannot imagine you not getting some significant sniffs from the exposure.

okay dude....first of all- i know it has nothing to do with me, but I'm really proud (of you) that you rocked that CBR thing so long!

I would be yelling into the kitchen, "Hey Honey, ScotlandDan made it into the next round."

But I gotta say...apples & oranges.
I'm not knockin' the other guys in the competition, but they can't compare to your style. While I mean that as a compliment, I ALSO mean that in the respect that the other guys have a very generic (and i'm sure, editor friendly) "style" that doesn't really stand on it's own.

I like when you can tell by looking at a diembodied fist or calf muscle and tell you the artist is because their "style" is that prevalent.

I think you OWNED the style category hands down....eventhough it wasn't a category. It should'a been.

Guys, thanks a lot for the kind words. It's been slow going so far I have to say...

mattcrap, your story about shouting through to your wife made me LOL and your comments about my style made me do a little cry. We're definitely doing something together in new year, man!